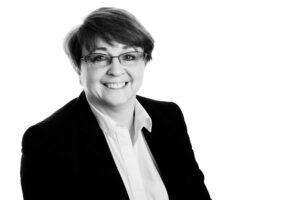 Val Stocker is a Corporate Solicitor and a Partner at North Ainley. She heads the firm’s Commercial Department.

Val originally trained in Bradford qualifying in 1986. She then worked for Elliott & Company in Manchester before joining North Ainley in 1990. Val became a Partner in 1992.

Her areas of expertise are acting for Sellers and Purchasers of businesses and privately owned Companies, preparing Shareholder and Partnership Agreements and advising on business tenancies for both Landlords and Tenants.

Having lived in Saddleworth for over 20 years Val is active in her local church, and is a Governor of the Hulme Grammar School, Oldham.  She is a keen skier and enjoys walking in the Saddleworth hills to unwind.