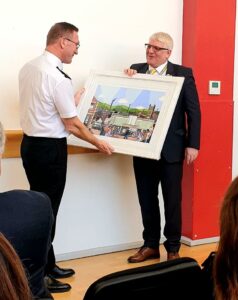 Ian joined GMP in April 2008 on promotion to Assistant Chief Constable.  He started his career in Staffordshire Police and has served in Northamptonshire and Cheshire Police.  In 2011 he undertook a three-month secondment as syndicate director for the Strategic Command Course.   He was appointed Deputy Chief Constable of GMP in December 2011 with responsibility for Force performance, the Force Change Programme and Corporate Communications.  He was appointed as Chief Constable of GMP in October 2015.

Ian has experience of leading major change in a large complex organisation, managing large scale events, including the largest terror attack seen in the UK since the 2005 London bombings.

Ian has an MBA (distinction), Postgraduate Diploma in Operations Management and is a Fellow of the Chartered Management Institute.  Ian was awarded the Queen’s Police Medal in the Birthday Honours 2016.

Another inspiring talk for the staff at North Ainley Solicitors.